Michael Sam Got Drafted. Now I'm Nauseated. (maybe not for the reason you think)

This past weekend history was made. Michael Sam became the first openly gay football player to be drafted into the NFL. 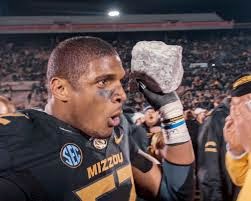 I am a huge football fan. I listened to all 3 days of draft coverage on the local sports station and I loved every minute of it. I knew that Michael Sam got drafted by the St. Louis Rams in the 7th round the moment it happened. I didn’t think anything of it to be honest. I support equality. I work against misconceptions and mistreatment of all in the LGBT community.  But I found myself a bit nauseated while listening to the radio this morning.

And they were talking about Michael Sam…

ESPN has talked about Michael nearly every week since he declared for the draft even though he was slated to go somewhere in the 3rd-5th round. The only two football players that were talked about as much were Johnny Manziel and Jadeveon Clowney, a Heisman Trophy winner and the 1st overall pick.

I was already a little bit unsettled by the amount of conversation about this particular football player. ESPN did this last year by over sensationalizing Manti Te’o, and they were even worse this year.

You see what unsettled my stomach is not that a gay person is now in the NFL. It was not that a kiss between two gay men was shown on television. What unsettles my stomach is that none of those two things impact the actual playing of football, yet it is receiving as much if not more of the attention. Don’t misunderstand me to be suggesting that we should move back to the “don’t ask don’t tell” policy of the media with regard to homosexual athletes. I just feel bad that it is even an issue. I feel bad that Michael Sam’s football career has been and will be negatively affected by the media. I congratulate Michael for being the first openly gay NFL player drafted, but he still has to make the team and the media circus won’t help that.

Certainly the moment deserves its respect and acknowledgement, but the clip of a football player kissing his significant other doesn’t belong on Sports Center every 15 minutes. ESPN created the moment for ratings, waiting 3 days at the house with Michael Sam so they would have a leading story this week whiter he got drafted or not. Once drafted ESPN increased the drama of the moment by bringing Michael a cake, and rolling the camera until a kiss happened (which didn’t take long).

No matter the topic, I don’t like it when a story is over sensationalized for ratings. The radio station show hosts were describing the scene in a clearly overly dramatic way while asking listeners for their reactions. And that is what unsettled my stomach.

A person’s sexuality has no relevance to sports. It will not make him any better or worse of a player. However, the media circus that is following this young man will have an impact on his play. It is a distraction for him and whatever team he plays for. Therefore ESPN might very well be responsible for this man not being able to make the team.

Most of the United States is fine with having gay athletes so why did ESPN do this? Why do sports talk guys feel like they should comment either way on the matter? I may be completely off base in my assessment or understanding of why it’s important to be discussed in shock jock fashion for 15 minutes during morning drive time, but it seems to me like exploitation of Michael Sam. I’m not comfortable with that.

Leave your thoughts in the comments below. (although I reserve right to delete comments if they are crude or intentionally offensive)
Posted by Jacob Fields at 5:48 PM