Today is one that many who are superstitious label as unlucky, but it has a chance to be super lucky for someone.

Tonight's Mega Millions Jackpot has an estimated value of 425 Million or cash value of 228 Million. 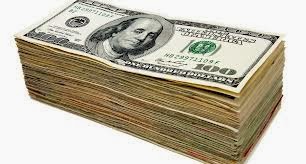 Have you ever thought about what you might do with that kind of money? This summer I did a blog post on what I would do with 1 million in cash (read it here), but 425 Million?

That is an amount in a windfall that is really easy to be "stupid money." Stupid money is when you have more money than you know what to do with and start doing "stupid" things with it. You might even accidentally give your kids "affluenza."

I mean sure it sounds well and good to go to the top of tall building over a busy street and make it rain with $100K in fivers, but that would be stupid because you would probably cause an accident and possibly get someone killed.

I personally would dedicate 100 million of it to forgiveness, and helping people escape from whatever debt they find themselves buried under. I should probably write a post explaining this in more detail.

I would put about 10 million into a mutual fund so that I could live off the interest and would never need a paycheck again. I would keep working though because what I do is not about money it is about a calling, I just wouldn't need to get paid. I'm not sure what I would do with the rest other than pay taxes.

What would be the first thing you would do if you won?

The trick to it is the odds are 1 in 259 Million and you would have to play to win. As a whole I do not advocate gambling, and yes playing the lotto is considered gambling, smart financial management and sound biblical principals all teach that in the long run you would be better off investing the money that you would have spent gambling. I might buy a ticket for this one anyways how about you?

Paraskevidekatriaphobia or not, have a great Friday the 13th.

Posted by Jacob Fields at 2:12 PM No comments: